The Painter from Shanghai: A Novel 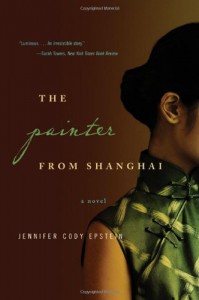 This is a fictionalized account of the life Pan Yuliang, a post-impressionist Chinese painter who was quite controversial in her time—as a woman artist and painter of nudes, including nude self-portraits. Born at the end of the 19th century, she grew up in a time where women were culturally oppressed and when the entire country was undergoing a period of political upheaval. I thought Epstein did a beautiful job of conveying the cultural challenges Yuliang faced and overcame, eventually resulting in her move to France in 1937 in order to continue her painting.

I really enjoyed the first half of the book. There was a richness and depth in the telling of her early years--from orphan to prostitute to concubine. I became vested in her story as I saw her growing from a shy, downtrodden girl to becoming more self-possessed. However the second half fell a bit flat for me with the discussions of art and politics coming off as more an historical lesson rather than blending into the story of Yuliang’s development as an artist. I found myself skimming over those sections. Nevertheless, I still enjoyed this novel and have since viewed her artwork on the Internet.